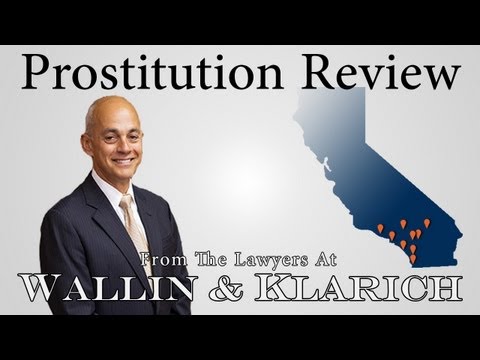 If you are facing prostitution charges in California, you will need an experienced attorney fighting for your freedom. The consequences of a prostitution conviction can be severe, but our lawyers at Wallin & Klarich are dedicated to helping you achieve the best possible outcome in your case.

An experienced prostitution lawyer can help you raise several defenses to in an attempt to have your prostitution charges reduced or dismissed. Below are some of the defenses that our attorneys have used successfully to help our clients avoid the serious consequences of  this crime.

Often times, law enforcement officers will watch what they believe to be a prostitute and a prospective client agreeing to engage in an act of prostitution, but in reality, no such agreement was reached.

In these situations, the circumstances surrounding the alleged agreement to engage in prostitution may suggest that the prostitute and the customer had agreed to engage in prostitution or that one person had solicited the other to commit an offense to prostitution charges. However, this may not be the case. For example, you may actually have been lost in a bad neighborhood while asking a woman on the street for directions. The law enforcement officer may not have heard your conversation with the woman because he was too far away. Thus, he merely assumed that you were soliciting a prostitute, when you in fact were not.

These types of situations where the officer does not hear the conversation between the alleged prostitute and alleged customer happen more often than you would think. The experienced attorneys at Wallin & Klarich can identify when the police officer’s belief that you were soliciting a prostitute or agreeing to engage in prostitution was false or unreliable.

It is important to note that the compensation does not need to be for money. Although we often think of money changing hands when we think of prostitution, an exchange of another item or good instead of money can also result in an act of prostitution. For example, a customer may agree to give drugs or a valuable item to the prostitute in exchange for sexual intercourse.

There may not be an act in furtherance of the agreement to engage in prostitution. For example, the undercover police officer posing as a John asks if you would engage in sexual intercourse with him in exchange for money and you agree to do so, but do not perform any other act to further engage in sexual or lewd conduct, then there is insufficient evidence to support your prostitution charges.

Entrapment occurs when a law enforcement officer behaves in an overbearing way that would result in a normally law-abiding person committing an offense. Law enforcement agencies often use undercover police officers to pose as prostitutes or customers in order to catch individuals who may wish to engage in prostitution. If the undercover police officers pressure you in an overbearing way to engage in prostitution, the defense of entrapment may apply to your case  and you cannot be proven guilty of prostitution charges.

For example, an undercover officer merely asking you if you want to exchange sexual intercourse for money is not overbearing behavior that would cause a law-abiding citizen to engage in prostitution. On the other hand, if an undercover prostitute comes up to you multiple times while you are walking down a street and offers to provide you with sex for a sum of money and you say “NO” until you finally “give in” to the request, your lawyer may be able to raise the entrapment defense successfully against your prostitution charges.

The court will also consider whether the individual had a predisposition to commit the crime when considering the entrapment defense. If you have prior convictions for engaging in prostitution, then the court will likely not believe that the police officer’s behavior forced you to commit an act of prostitution.

If you have been charged with prostitution, you are facing serious punishment. The experienced prostitution defense attorneys at Wallin & Klarich are here to help defend you in your prostitution case. Our attorneys have over 40 years of experience successfully defending clients facing prostitution charges. We will devote the time and skill necessary to get you the best result possible in your case.

Our offices are located in in Orange County, Los Angeles, San Diego, Riverside, San Bernardino, Ventura, West Covina, Victorville, Torrance, and Sherman Oaks. Call us today to at (877) 4-NO-JAIL or (877) 466-5245 for any questions or concerns regarding your case. We will be there when you call.