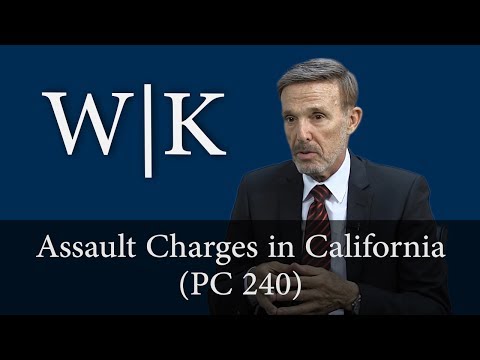 “Assault” occurs when you take intentional steps to violently injure another individual. In order to convict you of assault under California Penal Code 240 and 241, the prosecution does not have to prove that you actually touched or injured the alleged victim. Rather, they must prove:

In California, assault is considered a violent crime and prosecutors pursue these cases aggressively. If you are charged with assault, you face very serious legal, professional, and personal consequences. The laws regarding assault can be very confusing. This is why it is extremely important to contact one of our experienced assault defense lawyers at Wallin & Klarich as soon as possible. Our attorneys will answer all of your questions and remain by your side throughout the legal process so you don’t have to face these serious charges alone. Contact us today for a complimentary consultation.

If you’re facing an assault charge, you are under threat of suffering serious consequences. Aside from the negative professional and personal impacts, there are serious penalties that the state can impose on you if you’re found guilty.

California Penal Code 240 classifies assault as a “misdemeanor.” If you are found guilty of simple assault, you face six months in county jail, a maximum fine of $1,000, or both.

The court may also require you to complete an expensive batterer’s program or perform community service.

Punishment For Assault Against A Peace Officer | PC 241

If you’re convicted of assaulting a peace officer, firefighter, emergency medical technician, or other public safety personnel, you face even more serious penalties. Under California Penal Code 241, your punishment can include a maximum fine of up to $2,000 and a possible sentence of one year in county jail.

Punishment For Assault With A Deadly Weapon | “Aggravated Assault” | PC 245

Assault with a deadly weapon, commonly known as aggravated assault, comes with severe penalties. Under California Penal Code 245, the prosecutor can charge you with either a felony or a misdemeanor. Given the elevated nature of this charge, the consequences are generally more severe than a ‘simple’ assault charge.

Under the assault laws in California, a charge of assault is a very serious matter with life-altering consequences. If you’re found guilty, you will have a mark on your record for the rest of your life. This may keep you from getting a job. It also may have a negative impact on your personal relationships. We understand how stressful it is to be charged with assault, and we know you must have many questions. The good news is that our assault defense attorneys have over 40 years experience successfully defending cases just like yours. When you choose Wallin & Klarich, you not only have experience on your side. You also have an ally that will provide you with straightforward answers to all your questions and concerns. Please call us today at (877) 4-NO-JAIL for a free phone consultation.

Being charged with assault in California may make you feel like there is no end in sight, but with Wallin & Klarich on your side, you’ll have an experienced assault defense attorney that understands the ins and outs of the law. Throughout our 40+ years of representing clients all over Southern California, we have identified many effective defenses that often help our clients achieve the best possible results. Some effective defenses that we have identified include (but are not limited to):

The most common defense for assault is  “self-defense” or “defense of others”. Your lawyer will gather evidence that shows that your actions were necessary in order to protect yourself or others from the violent actions of the alleged victim. In many cases, people accused of assault claim they were being attacked. In California, you have the right to defend yourself against an attack, but only with reasonable and proportional force.

For example, if someone pushes you down, you have the right to resist or push them back. However, you don’t have the right to pull out a bat and hit them. Your lawyer will look at all of the details in your case to find evidence that supports your claim of self-defense.

Another defense to an assault charge is that you had no intent to assault the alleged victim. For example, you may have swung your arm and did not realize the person was standing behind you. Your lawyer will gather witness testimony to support that you did not know the victim was there.

One of the first things that should always be examined in any assault case is the credibility of the allegations. We have found that alleged victims may often falsify (or greatly exaggerate) their claims of assault. There are many reasons as to why an alleged victim might do this. Sometimes, this is simply due to a misunderstanding or an outright act of revenge.

Your defense attorney will also look at the claims of other witnesses. For example, if a witness says he/she saw you swinging a bat in the direction of the alleged victim, your defense attorney could gather evidence to show that the witness wasn’t there to see the act. During the first steps of any assault case, a highly skilled Wallin & Klarich attorney will thoroughly assess the details of your case in order to determine the nature of credibility, which is a cornerstone of the prosecution’s argument.

Hiring A Defense Attorney | How We Can Help You

When dealing with such serious allegations, it is crucial to hire the best attorney you can find. At Wallin & Klarich criminal defense firm, we believe that there are four (4) key aspects that you, the client, should look for when hiring an attorney.

Here at Wallin & Klarich, our team of highly-trained attorneys have over 40+ years of experience representing clients accused of assault. This experience does not only mean that we are competent in the methodology of the case, but equally important, we know our way around the local courthouses. Not only do we know what we bring to the table, we also know what the prosecution brings to the table. This sometimes overlooked and often underappreciated knowledge makes it easier to craft a defense that gives you the highest chance of success possible.

Cases are won in the courtroom, but made in the office. At Wallin & Klarich, we believe that communication and transparency are a vital key to a successful case. With all the paperwork and steps involved in a case, it is common for clients to get lost in the legal process and only have a vague idea of what is going on in their case. We believe this is outright wrong. By keeping an open line of communication with our clients and walking side-by-side through all the steps of the case, we have found that our clients are not only happier, but receive a better outcome when communication is kept at the forefront of our efforts.

Give us a call, toll-free at (877) 4-NO-JAIL and let’s begin communicating on how we can get the best outcome for your case.

Words mean nothing if the outcome of our cases are subpar. We are confident enough in our abilities to deliver the best possible outcome of your case that we invite you to read about some of our previous big wins in the courtroom! Reputation & Ethos | Wallin & Klarich A Reputation You Want on Your Side

With an abundance of attorneys practicing in every area throughout California, it is often difficult to parse the noteworthy ones from the average. Luckily, you don’t have to. Throughout our years of representing Assault and other high-stakes crimes, the attorneys at Wallin Klarich have made appearances all throughout television, newspapers, and websites. Don’t take our word for it, though. Call us today, toll-free at (877) 4-NO-JAIL for a free consultation and see why we have been the go-to assault defense attorney in Southern California for more than 40 years!

If you were in fact defending yourself or a third party from the imminent danger of serious bodily harm by your attacker, then self-defense may be an appropriate defense for your case. However, this depends on whether or not your assault defense attorney can argue that you were defending yourself or a third party. The California assault laws provide that you can only use force reasonably necessary to prevent injury to yourself or a third person. This means that your act of self-defense must ordinarily be proportional to the imminent threat of harm. Call us today to speak to an experienced assault defense attorney.

Yes. Although you can also be charged with a misdemeanor for throwing an object at a vehicle on the roadway pursuant to California Vehicle Code 23110, this act also may be charged as assault under California Penal Code Section 240.

Yes. Under the doctrine of Transferred Intent and the assault laws under California Penal Code sections 240-241, the prosecutor is required to prove is that you willfully assaulted someone. There is no requirement that the person assaulted was your intended target.

This ultimately depends on how you used the gun. If you simply pointed a firearm at the alleged victim and it was unloaded, then your Southern California assault defense attorney can argue that you did not have the present ability to commit the assault. However, if you used the unloaded gun to attempt to beat the alleged victim, then you still can be charged with assault with a deadly weapon under California Penal Code Section 245.