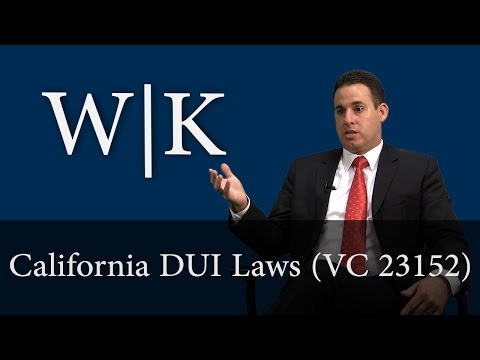 What is a DUI?

In Riverside, driving under the influence (DUI) while under the influence of alcohol or drugs is illegal. California Vehicle Code prohibits operating a commercial or personal vehicle while impaired by alcohol, illegal drugs, or prescription medication. If you’re charged with a DUI, you face serious legal penalties. A DUI conviction can also have a negative impact on your personal and professional life as well. This is why it is important to speak with our experienced DUI defense attorneys at Wallin & Klarich as soon as possible.

The prosecution can charge you with either a misdemeanor or felony DUI, depending on the unique circumstances of your case. There are several different types of formal DUI charges including but are not limited to:

Under California Vehicle Code 23152(d), it is illegal to operate a commercial vehicle with a BAC of 0.04% or higher. If you have a BAC of 0.04% and drive a semi-truck, taxi, bus, or any vehicle used to commercially transport property or people, you can be charged with a commercial DUI.

Felony DUIs are covered under California Vehicle Code 23153, which states that it is illegal to drive a vehicle under the influence of alcohol and/or drugs and commit an illegal or negligent act that causes injury to another person. For example, you drink a few alcoholic drinks and run a stop sign, causing a wreck. The person in the other vehicle suffers a broken arm. You can be charged with a felony DUI.

Under California Vehicle Code 23154, it is illegal to have any amount of alcohol in your system while on probation and driving. This means if you’re driving while on probation and stopped by the police, you can be arrested for a DUI with a BAC level of 0.01% or higher even though you’re under the normal legal limit.

Under California Vehicle Code 23136, minors, anyone under the age of 21, can also be charged for having any amount of alcohol in their system. If you’re under 21 and have a BAC of 0.01% while driving, you can be arrested and charged with an underage DUI.

A DUI charge in Riverside can result in serious legal consequences, especially without experienced representation at your side. If you’re charged with a DUI in Riverside, you should consult one of our skilled DUI defense attorneys at Wallin & Klarich. With a simple phone call, we can begin helping you build the expert defense you need and deserve.

The penalties that you’re facing will largely depend on the type of DUI you’re charged with as well as any previous DUI convictions. We’ve outlined the legal penalties for first, multiple, and felony DUIs, along with the personal and professional impact of a DUI conviction.

Penalties for a First DUI Conviction

In Riverside, the prosecution will usually charge you with a misdemeanor, unless other factors enhance your charge. The penalties for a first DUI conviction include:

Penalties for a Second DUI Conviction

Your second DUI conviction is also a misdemeanor in Riverside. If you’re found guilty of a second DUI offense within ten years of your first offense you face the following penalties:

Penalties for a Third DUI Conviction

Your third DUI conviction is also generally a misdemeanor, but it carries a more severe punishment than your first or second. If you’re convicted of a third DUI, you may receive the following penalties:

Penalties for a Fourth DUI Conviction

If you receive a fourth DUI in Riverside, you may be charged with a misdemeanor or a felony, depending on what the prosecution decides. If you have received three prior DUI convictions and are convicted of a fourth DUI offense within 10 years, you can receive the following penalties:

If certain conditions or factors exist, your sentence can be much more severe. DUI enhancements increase your sentence and include the following:

Aside from the legal punishment that a DUI conviction carries, you’ll also endure many negative consequences in your professional and personal life. Losing your license makes it incredibly difficult to get back and forth from work. You may miss additional work due to a possible jail sentence and required attendance at DUI classes, which could result in the loss of your job. To make matters worse, a conviction makes it harder to find a good job. Some employers may pass you over in favor of someone else with a clean record. If you work in any of the commercial driving sectors, you might be completely disqualified from applying due to the loss of your commercial driver’s license.

Without a doubt, being arrested and convicted of driving under the influence is humiliating and overwhelming. Court costs, fines, fees for DUI school, and increased insurance rates quickly add up to a heavy financial burden. As you can imagine, this stress can affect your personal relationships in many negative ways, making you feel lost and alone.

Many people in similar situations have turned to Wallin & Klarich for solid representation and expert legal advice. We understand that your peace of mind and freedom are at stake. There is no need to face this alone.

If you’re charged with a DUI in Riverside, all hope is not lost. With Wallin & Klarich defending your case, you have decades of legal experience and a track record of success in your favor. For over 40 years, we have represented numerous clients facing DUIs in Riverside, which has allowed us to identify many successful defense strategies. Some of the most effective defenses for DUIs include:

Your attorney may argue that you were not impaired by alcohol or drugs while driving. He will present evidence to show that while you did have alcohol in your system it did not impair your ability to drive a car.

Your attorney may show that the officer did not have reasonable cause to stop you. This defense may result in evidence against you being excluded from your trial and a dismissal of your charges.

Our attorneys have successfully challenged the results of chemical tests. There have been DUI cases in the past where the chemical testing equipment was found to be faulty due to improper calibration or defective lab equipment. This may be a good defense in your case as well.

Unfortunately, some officers do not follow the proper procedure when conducting Field Sobriety Tests (FST). If this is true in your case, your lawyer will defend you on these grounds and ask that the results not be included as evidence against you.

Hiring A DUI Defense Attorney | How We Can Help You

When you’re facing serious charges, it’s extremely important to hire a skilled attorney with a history of success in the courtroom. At Wallin & Klarich, we believe four (4) key aspects separate an average attorney from the best defense attorney.

With over 40 years of experience defending clients accused of driving under the influence, our attorneys at Wallin & Klarich understand the different strategies that work in the courtroom based on the details of each case. We are also familiar with the prosecutors, which gives us the advantage of knowing their strategies as well. Our real-world experience allows us to craft a strong defense and greatly increase your chance of success.

At Wallin & Klarich, communication and transparency are the foundation of our success. It’s easy for clients to get lost in all the paperwork and legality. We want you to know what is going on with your case, so we keep communication open and honest, taking the time to listen and address your concerns. This is why so many people choose our attorneys when facing a DUI charge. With 24/7 lines of communication and expert guidance throughout their legal journey, our clients are happier and more well-informed. Working together, we’re able to achieve the best results.

Let’s begin building the strongest defense for your case. Give us a call at (877) 4-NO-JAIL.

Anyone can say they are successful, but real results speak for themselves. We want you to be just as confident in our abilities as we are, so we invite you to take a look at some of our client’s success stories and big wins in the courtroom.

Reputation & Ethos | Wallin & Klarich A Reputation You Want on Your Side

With hundreds of lawyers claiming to have extensive experience defending DUI cases throughout Riverside, it is challenging to choose the right law firm to defend you in your DUI case. Over the course of 40 years of defending clients with serious charges, a number of our cases have been featured on television, in newspapers, and throughout the internet. Check out some of our most notable cases below.

If you or a loved one have been cited for driving under the influence, give us a call at (877) 4-NO-JAIL or (877) 466-5245 for a free consultation with one of our highly-experienced Riverside DUI defense attorneys.