Motion for a New Trial -Procedure For New Trial PC 1181 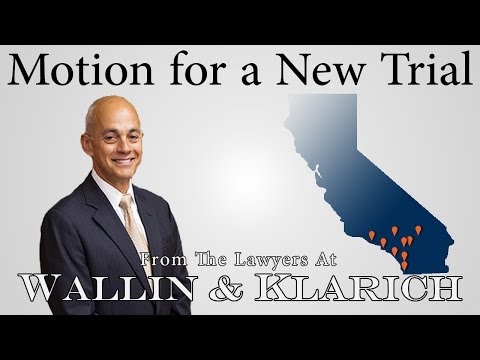 If you want to make a motion asking the court to grant a new trial, you must do so in a timely fashion or your ability to assert that right will be considered waived. According to California law, you are required to submit a written motion following the verdict but before the judgment, order granting probation, commitment for observation, or commitment for narcotics addiction or insanity, whichever comes first. However in situations where you need more time to gather evidence in order to prepare the motion, the court will allow you to waive time and extend the date of the sentencing, probation, or commitment hearing in order to do so.

The motion itself must include allegations of the error supported by evidence and a demand to set aside the verdict and order a new trial. The allegations of the error can include any number of statutory grounds for granting a new trial, but you must explain the source of the improper action with some particularity. General or overly broad statements of improper conduct will not suffice. In such situations it is always best to rely on an experienced California criminal defense attorney to help you prepare your statement.

Ruling on Motion for a New Trial

Under California PC 1181, the judge must rule on your motion for a new trial prior to the sentencing hearing and within 20 days after the guilty verdict has been issued. However, the court can extend this timeframe for up to 30 days if you need more time to prepare the motion or if there is a preliminary matter (such as a hearing to determine your mental disposition) that needs to be determined prior to ruling on the motion.

In determining whether or not to grant your motion for a new trial, the judge will review the allegations contained within the motion and compare them to the record, affidavits submitted on your behalf, and any evidence tending to show that an error was committed that deprived you of your right to a fair trial. In making this determination, the judge will weigh the evidence against the significance of the error in affecting the outcome of your case. If the error was so prejudicial that it significantly impacted the outcome of the trial and entering a judgment or verdict thereafter would be unjust, the judge will set aside the case and order a new trial on the merits. Although an error may have occurred, it must have been substantial enough to adversely affect the outcome of your case and ordering a new trial would be the proper remedy to ensure that you are afforded a fair and impartial trial.

When to Expect a Ruling

The prejudicial impact that legal error or prosecutorial misconduct can have on your case can be severe and potentially life changing, a motion for a new trial could be your best chance. If you or someone you know has been impacted by such improper action, you need to contact an experienced criminal defense lawyer who will carefully review the facts and the law to give you the best representation possible.

With offices in Orange County, Los Angeles, San Diego, Riverside, San Bernardino, Ventura, Victorville and West Covina, Wallin & Klarich has over 40 years of experience in ensuring our clients receive the fair and impartial trial that they deserve. We will carefully review the evidence against you and help you win your case.