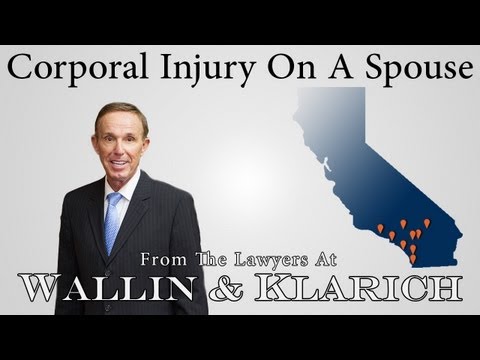 Prosecution of Corporal Injury Upon a Spouse Charges

If you or a loved one are being charged with corporal injury upon a spouse, it is important that you understand how the prosecution works under California Penal Code Section 273.5. Prosecutors know how to prove guilt of corporal injury upon a spouse charges in California, so you must know what kind of case is being built against you. It is critical that you have a skilled attorney working to build the best defense possible on your behalf.

What the Prosecution Must Prove

In order to be successful in proving corporal injury upon a spouse charges in California, the prosecution must prove three key elements:

2. You willfully inflicted that injury; and

3. A traumatic condition (a wound or other injury to the body caused by physical force, regardless of whether the wound is minor or serious) resulted from the injury.

Jury Instructions that will be Given to Jury if Your PC 273.5 Case Goes to Trial

Prosecution for PC 273.5 charges in California can result in significant penalties, so it is critical that you have the best defense possible. At Wallin & Klarich, we have we have offices in Orange County, Los Angeles, Riverside, San Bernardino, Victorville, San Diego, West Covina and Ventura. No matter where you live in Southern California, we have an office location near you. In order to have the best chance possible of prevailing in your case, it is important that you call Wallin & Klarich as soon as possible at (877) 4-NO-JAIL or (877) 466-5245 so we can make sure your side of the story is effectively represented. We will be there when you call.

The defendant is charged [in Count ] with inflicting an injury on [his/her] ([former] spouse/[former] cohabitant/the (mother/father) of (his/her) child) that resulted in a traumatic condition [in violation of Penal Code section 273.5(a)].

To prove that the defendant is guilty of this crime, the People must prove that:

2 The injury inflicted by the defendant resulted in a traumatic condition.

3 The defendant did not act (in self-defense/ [or] in defense of someone else).]

Someone commits an act willfully when he or she does it willingly or on purpose.

A traumatic condition is a wound or other bodily injury, whether minor or serious, caused by the direct application of physical force.

[The term cohabitants means two unrelated persons living together for a substantial period of time, resulting in some permanency of the relationship. Factors that may determine whether people are cohabiting include, but are not limited to, (1) sexual relations between the parties while sharing the same residence, (2) sharing of income or expenses, (3) joint use or ownership of property, (4) the parties’ holding themselves out as (husband and wife/domestic partners), (5) the continuity of the relationship, and (6) the length of the relationship.]

[A person may cohabit simultaneously with two or more people at different locations, during the same time frame, if he or she maintains substantial ongoing relationships with each person and lives with each person for significant periods.]

[A traumatic condition is the result of an injury if:

1 The traumatic condition was the natural and probable consequence of the injury;

2 The injury was a direct and substantial factor in causing the condition;

3 The condition would not have happened without the injury.

A substantial factor is more than a trivial or remote factor. However, it does not need to be the only factor that resulted in the traumatic condition.]

The court has a sua sponte duty to give an instruction defining the elements of the crime.

If there is sufficient evidence of self-defense or defense of another, the court has a sua sponte duty to instruct on the defense. Give bracketed element 3 and any appropriate defense instructions. (See CALCRIM Nos. 3470– 3477.)

Give the bracketed language “[and unlawfully]” in element 1 if there is evidence that the defendant acted in self-defense.

Give on request the bracketed paragraph that begins “A person is considered to be the (mother/father)” if an alleged parental relationship is based on the statutory presumption that the male parent is the natural father. (See Pen. Code, § 273.5(d); see also People v. Vega (1995) 33 Cal.App.4th 706, 711 [39 Cal.Rptr.2d 479] [parentage can be established without resort to any presumption].)

If there is evidence that the traumatic condition resulted from strangulation or suffocation, consider instructing according to the special definition provided in Pen. Code, § 273.5(c).