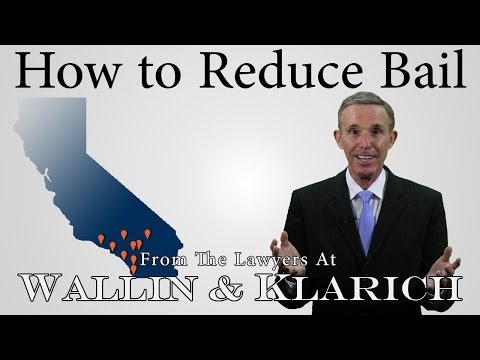 My spouse has been arrested in San Diego. Should I go ahead and post bail or talk to a lawyer before I do anything?

We strongly recommend that you speak to an attorney because he may be able to have your spouse’s bail reduced before the first court date. Also, if you talk to a lawyer your bail bond fee may also be reduced. An “attorney referred bond,” as this is called, can result in you paying an 8 percent premium rather than 10 percent. If your spouse’s bail was set at $100,000, for example, you would pay $8,000 for an 8 percent premium as opposed to $10,000, which you would pay if your premium was 10 percent. This could save you $2,000.

There is also a chance your attorney can convince the judge at the first court hearing to release your spouse without bail, known as “being released on their own recognizance.” This could result in thousands of dollars in savings. Call the experienced attorneys at Wallin & Klarich toll free at (877) 4-NO-JAIL before you do anything else.

Can a previous failure to appear for a minor traffic ticket be used against me at a felony bail hearing in San Diego?

Yes. Your previous failure to appear can result in your bail being raised substantially at your hearing. If you failed to appear for something as minor as a traffic ticket, the prosecutor will argue, that is a strong indication you will not appear in a felony case.

My bail bondsman let me make payments when I posted bail with him after I was arrested. But now I can’t pay him because I lost my job. Will I have to go to jail again?

Unfortunately, the answer is that, more than likely, you will have to return to jail. When you were bailed out of jail, you made an agreement with the bail bondsman that you would make payments on what you owed. By not paying, you are violating that agreement.

As a result, the bail bondsman can tell the court that you have not held up your end of the agreement, and you can be arrested again. Please contact the bondsman to try and make a new payment arrangement. He would more than likely prefer you pay something rather than pay nothing while in jail.

How can an attorney help me at my bail hearing in San Diego? Shouldn’t I just go ahead and pay the bail before the hearing?

When you are first arrested, it is extremely important that you have a lawyer. There are some instances where an attorney can assist in attempting to lower your bail. At your bail hearing, your attorney can provide the following evidence in order to convince the court to reduce your bail:

All of this evidence can be used to lower your bail amount and ultimately save you a great deal of money.

Wallin & Klarich will be there when you call

If you or someone you know has been arrested, it is critical you hire an attorney who will provide representation in every phase of the criminal proceeding. The attorneys with Wallin & Klarich have helped people accused of crimes for more than 40 years and continue to aggressively protect their rights. We have offices in Orange County, Los Angeles, San Diego, Riverside, San Bernardino, Ventura, Victorville and West Covina. If you would like a consultation, call us as soon as you can toll free at (877) 4-NO-JAIL. We will be there when you call.