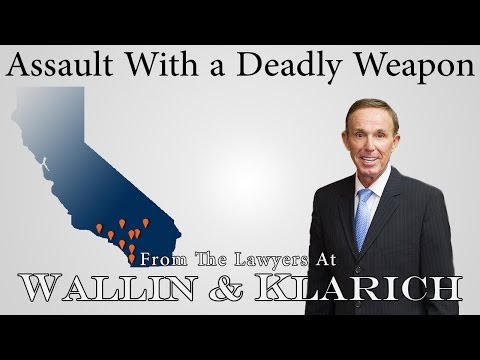 At Wallin & Klarich, we have over 40 years of experience in successfully representing Orange County residents facing prosecution for assault and battery with a deadly weapon. Drawing from extensive experience, our talented defense lawyers will thoroughly review your case and develop an effective defense strategy specifically tailored to your needs. Our goal is to provide you with the best legal representation possible. To help you become more familiar with assault with a deadly weapon prosecution, we want to share what the prosecution needs to prove in order to convict you of this offense.

CA Penal Code 245: Assault and battery with a deadly weapon

CA Penal Code section 245 describes what the prosecution needs to prove in order to find you guilty of assault and battery with a deadly weapon:

An assault and battery with a deadly weapon charge also requires a willful act in order to convict. An act is “willful” if it is done on purpose rather than by accident or mistake. You do not have to specifically intend to break the law or injure someone so long as you intended to commit the act giving rise to the assault charge.

The ability to use of force does not necessarily mean the ability to cause extreme physical pain or injury. It simply means that you had the opportunity to touch another in a harmful or offensive manner. You do not even need to touch the person in order to be convicted of assault and battery with a deadly weapon. All that matters is that you had the ability to use force, and based upon your actions, it was reasonable for the alleged victim to believe that you were going use such force against them.

For example: You and your friend are having a heated verbal argument in the kitchen. You grab a knife from the counter, point it at him, and say that if he doesn’t take back what he just said you are going to make him sorry. You are joking, but he doesn’t know that. Although you never specifically threatened to use the knife on your friend, the fact that you had the apparent ability to do so and the fact that he reasonably believed you would use the knife to harm him could give rise to an assault with a deadly weapon charge.

Having to suffer through the stress of an assault with a deadly weapon prosecution can be a scary and life changing event. You need a criminal defense attorney in Orange County who is willing to put your interests ahead of all others. Wallin & Klarich has successfully represented clients facing assault and battery charges in Orange County, Los Angeles , San Diego, Riverside, San Bernardino, Ventura, West Covina and Victorville for over 40 years. We have the knowledge and the know-how to win your case. Speak with one of our highly regarded assault and battery defense attorneys today at (877) 4-NO-JAIL. We will be there when you call.