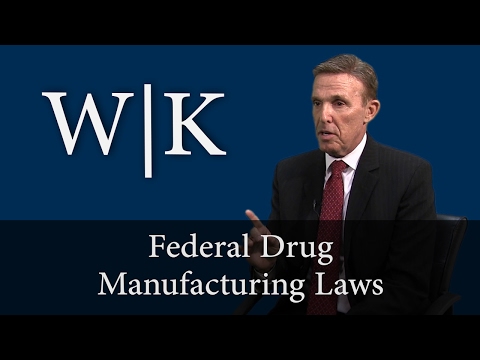 Since the 1980s, the United States has waged a “war on drugs,” with the principle focus on destroying the commerce of the drug trade. The government seeks to cut off the supply of drugs and money to drug cartels. One of the key aspects of this is to aggressively prosecute manufacturing, distributing, or possessing with intent to manufacture or distribute drugs. This means that if you are arrested for manufacturing drugs in California, not only are you facing criminal charges for violating a number of California laws, you could also potentially face prosecution under federal law.

Federal laws prohibiting drug manufacturing are found in Chapter 21 of the U.S. Code, section 841 (21 USC 841). It is a very long and complex law that covers many aspects of the drug trade. It includes crimes for the setting of “boobytraps” on the premises where the drugs are manufactured or stored.1 Because of the length and complexity of the statute, we will restrict this article to the crimes in subsection (a) of the law, which concerns manufacturing a controlled substance, or of a counterfeit substance that the person intended to pass off as a drug.

Under this federal law, it is a crime to knowingly or intentionally:

“Knowingly or intentionally” refers to your state of mind at the time you acted. Under this law, you must know that you are manufacturing a controlled or counterfeit substance, or you must have intended to do so.

Unlike state crimes, which are prosecuted by a district attorney, a United States Attorney prosecutes federal offenses. In order for you to be convicted of violating federal drug manufacturing laws, the U.S. Attorney must prove several elements beyond a reasonable doubt. These elements include:

If you are convicted of manufacturing controlled substances amounting to the following quantities, you face a maximum sentence of 40 years in federal prison and a fine of up to $5,000,000 as an individual (or $25,000,000 as a group or organization):

(vii) Marijuana: 100 kilograms or more, or 100 or more plants regardless of weight

However, if someone dies as a result of the use of these substances, your sentence can be increased to a maximum of life in federal prison.

For increased quantities as listed below, you face an increased sentence of 10 additional years to an additional sentence of life in prison, and fined up to $10,000,000 for individuals ($50,000,000 as a group or organization):

(i) Heroin: 1 kilogram or more

You had no knowledge that the drug was a controlled substance

As with any criminal case, it is important to the prosecution that the police acted according to proper procedure. From the moment you are arrested, you should hire an attorney to review the events leading up to your arrest, and the police’s conduct both during and after your arrest. For example, if the controlled substances were seized without a search warrant, the substances may not be able to be legally used as evidence in your case. A skilled attorney may be able to have your case dismissed entirely if there has been a violation of your constitutional rights.

You were entrapped by law enforcement officers

Similar to police misconduct, entrapment is an affirmative defense under which you claim that you would not have committed the crime if not for the conduct of the officers.

Suppose you have a significant amount of credit card debt and a past history of illegal drug manufacturing. Desperate for money, you ask everyone you know if they know of any side jobs available to make some honest money. Your friend, with knowledge of your dark past, introduces you to an acquaintance that he believes to be a powerful business man. The man offers you a large business proposition involving illegal drug manufacturing for a great financial reward. You decline, but the man insists. After much deliberation, you decide to take the deal in desperation of clearing your financial debt. Weeks into manufacturing the controlled substances, you discover that the business man is an undercover cop and has set you up. You are arrested and are now being charged with federal drug manufacturing.

Under these facts, you had no predisposition to commit a crime, and had not considered committing a crime until suggested by the undercover police officer. This may be the basis of an entrapment defense, and can be used as an effective defense in your case.

You cannot be found guilty of federal manufacturing of a controlled substance if you did not manufacture more than is prohibited under federal law. However, you could be convicted under California law.

No. You can be prosecuted for federal crimes even if the crime took place entirely within California.

If you or a loved one is facing state or federal criminal charges related to drug manufacturing, it is critical that you speak to an experienced criminal defense attorney as soon as possible. At Wallin & Klarich, our attorneys have over 40 years of experience successfully defending people like you who have been accused of violating federal laws. Let us help you, too. We are committed to providing you with the personal attention you deserve, and to helping you overcome this difficult situation.

With offices in Los Angeles, Sherman Oaks, Torrance, Tustin, San Diego, Riverside, San Bernardino, Ventura, West Covina and Victorville, there is a Wallin & Klarich attorney experienced in federal criminal defense near you, no matter where you work or live.