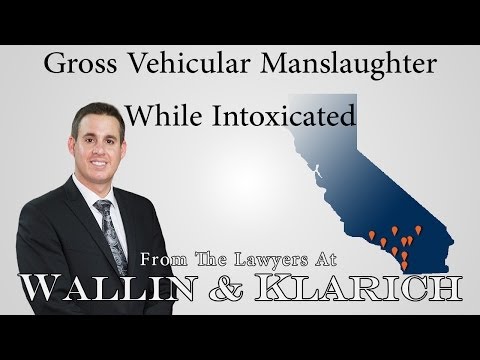 If you face prosecution for gross vehicular manslaughter while intoxicated with gross negligence, it is important to understand how this crime is defined under the California Penal Code. Our California criminal defense attorneys at Wallin & Klarich want to share with you what the prosecution needs to prove in order to convict you of this offense under CA PC 191.5(a).

California Penal Code section 191.5(a) defines gross vehicular manslaughter while intoxicated as driving under the influence resulting in the unlawful killing of a human being without premeditation or malice aforethought. In order to convict you of gross vehicular manslaughter while intoxicated under CA PC 191.5(a), the prosecution must prove the following:

Gross negligence is more than just ordinary carelessness, inattention, or mistake in judgment. You act with gross negligence if you act in a reckless way that creates a high risk of death or great bodily injury and a reasonable person would have known that acting in that way would create such risk. In evaluating whether you acted with gross negligence, the court will consider your level of intoxication at the time of the offense, the way in which you drove the vehicle, the injuries sustained by the victim(s) and any other relevant aspects of your conduct. Driving 30 mph over the posted speed limit or weaving in and out of highly congested traffic lanes can be considered grossly negligent behavior.

Unlawful act or an otherwise lawful act that might cause death

The unlawful act required for vehicular manslaughter while intoxicated can be any one of a variety of misdemeanor offenses and infractions under the California Penal Code or Vehicle Code. These offenses can range from speeding to crossing a double yellow lane divider. Even if the act itself is not illegal, you can still be convicted of gross vehicular manslaughter while intoxicated if there is a chance that the act can cause death.

An act causes death if it is the direct, natural, and probable consequence of the act and the death would not have happened without the act. Although there may be more than one cause of death, if your act is a substantial factor in causing the death, the causation requirement is met and you could be convicted of gross vehicular manslaughter while intoxicated.

For example: You are driving drunk on a winding county road and travelling at 100 mph. As you take the upcoming turn, you are travelling too fast to stay in your lane and swerve into oncoming traffic. In order to avoid colliding with your vehicle, a car travelling in the opposite direction has to veer off to the right and onto an embankment. The car ends up hitting a tree and both the passenger and driver die on impact. Although your vehicle never made direct contact with the other car, your act of swerving into oncoming traffic was a substantial factor in causing the death of another.

Under the influence of drugs or alcohol

You are considered “under the influence” of alcohol if a blood test or breathalyzer reveals that your blood alcohol content (BAC) is 0.08% or higher. You are considered under influence of narcotics if the drugs in your system have impaired your ability to drive a vehicle in a reasonable and ordinary manner. It does not matter whether the drugs are illegal, prescription, or over-the-counter. As long as the presence of any type of narcotic in your system has impaired your ability to drive safely, you can be considered under the influence. If you were not subject to a breathalyzer or blood test, a police officer can still establish that you were under the influence by testifying as to his observations of your appearance or behavior.

If you are facing gross vehicular manslaughter prosecution, you need to contact an experienced defense attorney who is dedicated to giving you the best representation possible. With offices in Orange County, Los Angeles, San Diego, San Bernardino, Riverside, Ventura and Victorville, Wallin & Klarich has successfully represented clients facing prosecution for gross vehicular manslaughter while intoxicated for over 40 years. Drawing from extensive experience, our talented defense lawyers will thoroughly review your case and develop an effective defense strategy to win your case.