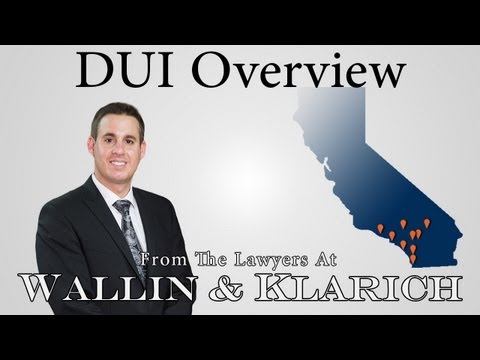 The sentencing guidelines for a DUI causing injury conviction in California are harsh and life altering. In the following, our DUI defense attorneys at Wallin & Klarich discuss the sentencing and punishment for DUI causing injury convictions in California. If you or are facing charges for a DUI with injury in Southern California, you need to speak to one of our professional lawyers at Wallin & Klarich, who have over 40 years of experience successfully defending clients charged with DUI causing injury. We can provide you with the guidance you need during this difficult time.

Punishment for DUI Causing Injury: First Conviction Per VC 23554[i]

The prosecutor has the power to charge a first DUI causing injury as either a misdemeanor or felony offense. Often referred to as a “wobbler,” this law grants significant prosecutorial discretion and permits the district attorney to choose between less severe (misdemeanor) and severe (felony) prosecutions.

A misdemeanor charge may result in imprisonment in county jail for a period of 90 days to 364 days and a fine from $390 to $2,000. In addition, your driving privileges will suspended for a 1- year period. A felony charge may result in imprisonment in county for a term of up to 3 years. Due to the significant discretion the prosecutor enjoys, you should consult with an experienced DUI attorney at the earliest possible stage of your case to most effectively impact the prosecutor’s decision-making process. The DUI lawyers at Wallin & Klarich can help you as soon as you are arrested. If the court grants probation, the terms may include:

If you are convicted of a third or subsequent offense under VC 23153 and the offense occurred within 10 years of two previous DUI or reckless driving convictions, the penalties will increase. You shall be punished by imprisonment in county jail for up to 4 years and by a fine ranging from $1,015 to $5,000. In addition, your driving privilege shall be revoked for a period of 5 years. If you are punished under VC 23153, you will be designated as a habitual traffic offender for a period of 3 years, subsequent to the conviction. The habitual traffic offender designation will increase the penalties for certain driving offenses that are committed after the designation.

If you caused bodily injury to more than one victim as a result of a DUI causing injury under VC 23153, you shall, upon a felony conviction, receive an increased sentence of 1 year in county jail for each additional injured victim. The maximum number of three 1-year enhancements may be imposed pursuant to this section. Although you may be subject to increased penalties, you will face one DUI charge if multiple victims were involved in a single accident. If you caused the death of another person while driving under the influence, you may be prosecuted for vehicular manslaughter or Watson murder.

Let Wallin & Klarich Make The Difference In Your Case

The sentencing and punishment associated with a DUI causing injury conviction are serious. If you are facing potential charges, please contact the team of experienced and reliable DUI attorneys at Wallin & Klarich: (877) 466-5245 or submit the intake form at the top of this page.