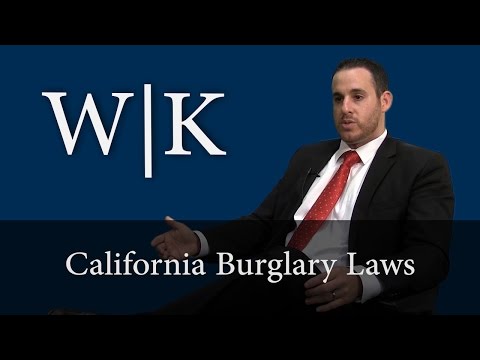 Under California Penal Code Section 459, the prosecution must prove all of the following elements in order to convict you of burglary:

Intent is what makes proving the crime of burglary complicated for the prosecution.

Let’s say you were in fear for your life, so you ran to the closest home and broke into the home to avoid imminent danger. In this case, you entered an inhabited home, but you did not do so with the intent to commit a felony offense, so it is unlikely that you would be convicted of burglary.

What if, after you broke into the home, you saw something that you decided to steal? Could you be charged with burglary then? The answer is no.

Let’s take a closer look at intent in a burglary case.

What Kind of Evidence Might Show Intent in a Burglary Case? How can the prosecution show you intended to commit theft or another felony at the time you broke into a home?

It will be up to the prosecution to prove that your act meets all of the elements of the crime. Of course, prosecutors will not be able to read your mind during the time of the incident, so it will look to any available evidence that may show you had the intent to commit a crime when entering the home.

For example, security camera footage may show you visited the home previously. If you were wearing clothes such as dark clothing and a ski mask or carrying items such as a crowbar or an empty bag, it may convince a jury that you intended to commit a crime.

Your experienced burglary defense attorney from Wallin & Klarich will attack the prosecution’s evidence and provide alternative explanations in order to raise reasonable doubt that you had the intent to commit a crime. For instance, your lawyer may argue that you were drunk at the time of the incident, which means you could not have had the required specific intent to commit theft or another felony upon entering the inhabited building.

Our Experienced Burglary Defense Lawyers Can Help You Now

If you or someone you love has been accused of burglary, you need the help of an experienced burglary defense attorney. Our attorneys at Wallin & Klarich have more than 40 years of experience successfully defending clients accused of serious crimes such as burglary. We understand the elements of burglary, and will use all of our skill and knowledge to provide you with the best legal defense possible in your case.

With offices in Orange County, Riverside, San Bernardino, Victorville, West Covina, Torrance, Los Angeles and San Diego, there is an experienced Wallin & Klarich burglary defense attorney available to help you no matter where you are located.