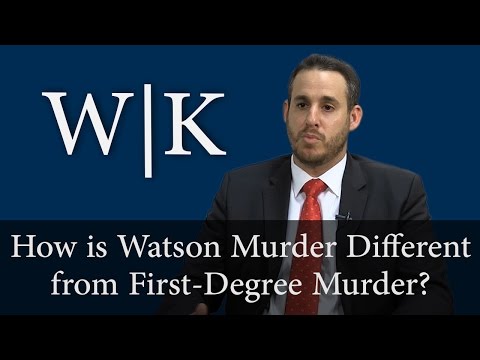 Based on the court’s ruling in People v. Watson, you can be charged with second degree murder if you drive while under the influence of drugs or alcohol and someone dies as a result of your conduct. The Watson Murder rule established in this case allows the prosecution to charge this offense (which is typically charged as a form of vehicular manslaughter while intoxicated) as second degree murder under California Penal Code section 187.

In order to convict you of second degree murder under the Watson Murder rule, the prosecution must prove the following:

An act causes death if it is the direct, natural, and probable consequence of the act and the death would not have happened without the act. Although there may be more than one cause of death, if your act is a substantial factor in causing the death, the causation requirement is met and you could be convicted of second degree murder under the Watson Murder rule.

For example: You are driving drunk on a winding county road and travelling at 100 mph. As you take the upcoming turn, you are travelling too fast to stay in your lane and swerve into oncoming traffic. In order to avoid colliding with your vehicle, a car travelling in the opposite direction has to veer off to the right and onto an embankment. The car ends up hitting a tree and both the passenger and driver die on impact. Although your vehicle never made direct contact with the other car, your act of swerving into oncoming traffic was a substantial factor in causing the death of another.

Malice aforethought is the mental state that must be formed before the act that causes death is committed. There are two kinds of malice aforethought, express malice and implied malice, and proof of either is sufficient to establish the state of mind required for murder. You act with express malice if you unlawfully intended to kill the victim. However, the prosecution will typically not attempt to prove that you acted with express malice for purposes of a Watson Murder charge. Rather, they will rely on evidence that you exhibited the mental state known as implied malice.

In order to show that you acted with implied malice, the prosecution must prove the following

An act is intentional if it does deliberately or on purpose. The prosecution does not need to show that you actually intended to kill another person. Rather, they need only show that you intentionally committed an act that would likely result in harm to another human being. The act of driving while under the influence of either drugs or alcohol poses a substantial risk of harm to both passengers in your own vehicle as well as other drivers sharing the same road. If you choose to drive a vehicle while intoxicated, this requirement is usually met.

Knowledge that the Act was Dangerous to Human Life

The prosecution will typically prove this knowledge in one of two ways:

Although a Watson Admonition and Court approved DUI school are the most commonly used items of evidence that the prosecution will use to prove implied malice, you do not need to have a prior DUI conviction on your record in order to convict you of this offense. Implied malice can be proven by any evidence tending to show that you had special knowledge of the dangers of driving while intoxicated.

If you have been charged with 2nd degree murder charges in California under the Watson Murder rule, you need to contact an experienced defense attorney who is dedicated to giving you the best representation possible.