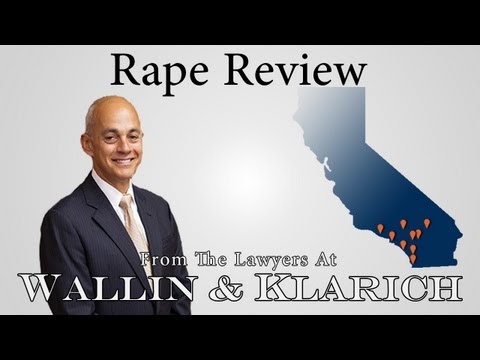 Our skilled criminal defense lawyers at Wallin & Klarich have been successfully representing clients facing rape charges for more than 40 years. We’ve helped our clients achieve the best possible outcomes in their case by fighting zealously for them and presenting mitigating factors to the court.

The exact punishment for rape charges depends upon the circumstances of the case and any aggravating and mitigating factors that apply in your case. Let’s explore how sentencing works for rape convictions in California.

Under California Penal Code Section 261, rape is a felony offense. If you are convicted of this crime, you face three, six or eight years in prison.

Additionally, if the alleged victim sustained great bodily injury (i.e. extensive bruising, vaginal soreness, broken bones or any other measurable physical complication) during the commission of the rape, the judge may enhance your punishment by imposing an additional five years on your sentence.

In addition to your lengthy state prison time for rape convictions, you also may be required to pay a fine of up to $10,000, according to California Penal Code Section 672.

Is Rape a Strike Under California’s Three Strikes Law?

If you are convicted of rape in California, you will receive a “strike” on your criminal record under California’s Three Strikes law. Under this law, you could face harsher penalties if you have previously been convicted of a strike crime.

Perhaps the most severe punishment for rape convictions is the requirement to register as a sex offender with local law enforcement as long as you live, work or attend school in the state of California. As a registered sex offender, your name and personal information may be posted on the Megan’s Law website for anyone to see, and you could face hostility from friends, family and neighbors. You may find it difficult to pursue career opportunities and gain employment due to your sex offender status.

How Does the Court Decide Your Punishment for Rape?

If you are convicted of rape in California, the court will not grant you probation as punishment. You must be sentenced to prison for the lower term (three years), middle term (six years) or upper term (eight years). So, how does a judge decide which term to use when sentencing you?

The court must review California Rules of Court 4.421 and 4.423 when it comes to determining your felony rape sentence.

The judge will also look at the aggravating factors that relate to your prior conduct or criminal history, including whether:

When determining your punishment for rape, the judge may also look to mitigating factors that relate to your prior conduct or criminal history, including whether:

What Percentage of Your Prison Sentence for Rape Will You Serve?

One of the most common questions our rape defense lawyers are asked regarding rape sentencing is “what percentage of my prison sentence will I have to actually serve?” Many people believe that they can receive “good time credits” while serving prison time and be released in about half the time of their sentence. However, that is not true for the crime of rape.

Parole as Punishment for Rape

When you are released from prison after serving at least 85% of your sentence for rape, you will be placed on parole. The length of your parole will be determined by how much time you served in prison.

When on parole for rape, you will be assigned a parole officer whom you will have to meet with on a regular basis. You will likely be ordered to wear a GPS tracking device on your ankle 24/7 and you will be restricted as to where you can live and work.

How to Find an Experienced Rape Defense Lawyer Near Me

When you are convicted of rape, your case is not over. The next step is sentencing, and our skilled rape defense lawyers can fight aggressively for you at your sentencing hearing so that you can obtain the best possible result in your case. Our experienced attorneys will attempt to present mitigating factors to the court so that you get the most favorable sentence possible.

At Wallin & Klarich, our skilled and knowledgeable rape defense lawyers have been successfully defending clients accused of serious sex crimes for more than 40 years. We’ve helped thousands of clients in their time of legal need, and we can help you now.

With offices in Orange County, Riverside, San Bernardino, Victorville, West Covina, Torrance, Los Angeles and San Diego, our rape defense attorneys are available near you no matter where you work or live.

Contact our criminal defense law firm at (877) 4-NO-JAIL or (877) 466-5245 for a free phone consultation regarding your case now. We will get through this together.