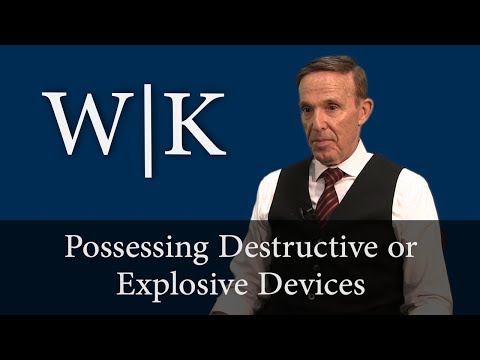 What Qualifies as a Destructive Device?

Examples of Destructive or Explosive Devices

There are a variety of weapons and devices that are prohibited in California under this law. Some of these prohibited devices include:

Destructive devices do not have to be particularly complex to manufacture. For example, a Molotov cocktail (a homemade explosive typically concocted from a bottle, a rag, and flammable chemical substance such as alcohol) will qualify as a destructive device.

In order to be convicted of this crime under PC 18710 – 18780, the prosecution must prove all of the following beyond a reasonable doubt:

Sentencing and Punishment for Possessing Destructive or Explosive Devices in California

Under What Circumstances Will Punishment Be More Severe?

Depending on the circumstances of your case, your sentence may be increased. Possessing a destructive device or explosive in specified locations can increase your sentence. Under PC 18715, these places include:

If you are convicted of this crime, you face two, four, or six years in state prison.

Under PC 18740, if it is proven that you had the intent to injure, intimidate, or terrify a person, or to wrongfully injure or destroy property, your sentence can increase to three, five, or seven years in prison. Under PC 18750, if you have malicious intent to injure another human being with the device, you may be sentenced to imprisonment of five, seven, or nine years in state prison. Finally, under PC 18755, if your device has caused the death or mayhem of another human being, you could be sentenced to state prison for life without the possibility of parole.

Defenses to a Charge of Possession of Destructive or Explosive Devices

If you are charged with possession of a destructive device, a skilled criminal defense attorney may be able to raise several defenses on your behalf. Some of these may include:

Frequently Asked Questions on Possession of Destructive or Explosive Devices

What if I did not know the device or weapon was illegal?

In California, the prosecution must prove that you knew that the device was destructive. If you did not have knowledge of the potential harm that the device could cause, you should not be convicted of this crime.

Are common chemical compounds such as gasoline considered destructive devices for purposes of PC 18710?

I am a retired military veteran and I was arrested for possessing a grenade. Can I be convicted of this crime?

Why Should You Call the Criminal Defense Attorneys at Wallin & Klarich?

With offices in Orange County, Riverside, San Bernardino, Victorville, Torrance, West Covina, Los Angeles and San Diego, there is an experienced Wallin & Klarich criminal defense attorney available to help you no matter where you work or live.