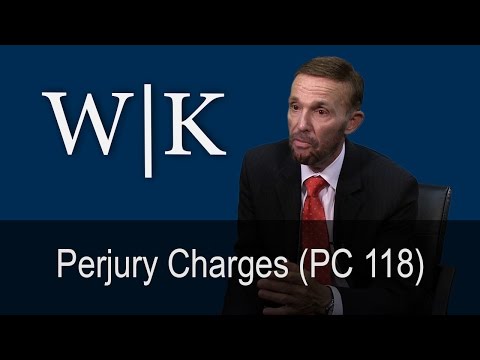 Perjury is the crime of lying under oath. If, while under oath, you attest as being true to any essential fact that you know is false, you commit perjury. California law pursuant to Penal Code Sections 118 through 131 outlines the various ways you can be found guilty of committing this serious crime.

You can commit perjury in or out of a courtroom, either orally or in writing. This applies whether you lie or you invite, persuade or coerce someone else to lie under oath – what is known as suborning perjury.

It is also unlawful for a law enforcement officer to commit perjury. Furthermore, perjury which leads to an innocent person’s execution may be punished as a capital offense.

You can be punished for committing perjury by being sent to jail or being placed on probation. A perjury conviction will damage your credibility and may lead to other serious and potentially long-term consequences.

In this section, our attorneys at Wallin & Klarich want to share with you how you can be prosecuted for committing or suborning perjury and some of the defenses we have successfully used to help previous clients to prevail in a perjury prosecution. We will also explain the consequences you should expect if you are convicted of lying under oath.

Finally, a few Frequently Asked Questions (FAQ’s) are included for your convenience. But first, let’s look at some of the ways you can perjure yourself…

Some of the ways you may trigger a prosecution for perjury are as follows:

Additionally, if you make a false written statement on a loan application or an income tax return, for example, you could also be facing charges for fraud, forgery and/or theft.

In order to convict you of committing perjury, a prosecutor must prove every element of the crime beyond a reasonable doubt. These elements include:

1. You made a deliberate and willful statement, either:

2. You knew that the statement was false;

3. You were under oath when you made the statement; and

4. The statement was a material fact or related to one.

Additionally, you can be found guilty of suborning perjury if a prosecutor can prove the following:

Possible defenses to a charge of perjury under Penal Code Section 118 include:

Sentencing and Punishment for Committing Perjury

Committing or suborning perjury in California is a felony and is punishable by up to four years in jail.

In rare cases, committing or suborning perjury is a capital offense when doing so causes an innocent person to be convicted and executed.

Wallin & Klarich Can Help You Fight a Perjury Charge

An allegation of committing or suborning perjury is a serious charge carrying serious consequences, including imprisonment and heavy fines. Additionally, you risk losing your professional license, your right to bear a firearm and your right to stay in the country if you are not a U.S. citizen.

Wallin & Klarich has offices conveniently located in Los Angeles, Sherman Oaks, Torrance, Tustin, San Diego, Riverside, San Bernardino, Ventura, West Covina and Victorville. Our attorneys are available 24 hours a day, 7 days a week to make certain all of your rights are protected and that you receive unparalleled legal representation throughout every step of your case.

We may be able to get the perjury charges against you reduced or dismissed altogether. We will do all within our power in order to help you avoid serving time in either jail or prison. We will help you obtain the best result possible in your case.