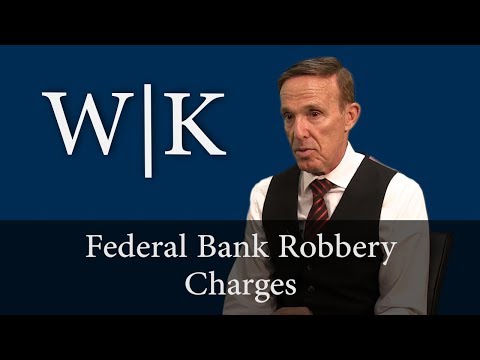 We’ve all seen the many movies involving masked men armed with guns descending upon a bank and running off with millions in cash. It’s a story line that is often romanticized and seemingly never goes out of style in Hollywood. In 1934, after the public was dazzled by the likes of John Dillinger and other infamous criminals, bank robbery became a federal crime.1 It continues to be a serious issue for authorities as the FBI reported about 4,000 bank robberies nationwide in 2014 alone.2

Federal bank robbery is covered under Title 18 section 2113 of the United States Code (18 USC 2113) as part of a comprehensive statute that has expanded to include other theft crimes as well. Under this law, federal bank robbery is defined as the “taking or attempted taking by force, intimidation, or extortion, of any property, money or any other thing of value belonging to, or in the care, custody, control, management or possession of any bank, credit union, or savings and loan association.”3

Here are some examples of situations where you might be charged with federal bank robbery in violation of 18 USC 2113:

If convicted of bank robbery involving any of those items, you will face the same fines and punishment as robbing a bank under 18 USC 21130.

In addition, you could be charged with other crimes in connection with robbing a bank depending on the facts of your case. These may include:

In order for you to be convicted of federal bank robbery in violation of 18 USC 2113, the prosecution must prove all of the following beyond a reasonable doubt:5

However, the penalties could substantially increase under the following conditions:

A skilled criminal defense attorney can raise several legal defenses to federal bank robbery charges (18 USC 2113) in your case. These defenses may include:

What is a bank, credit union, or savings and loan association for purposes of federal bank robbery laws?

Can I be charged with federal bank robbery for stealing money from the ATM machine?

Yes, ATM machines are within the bank’s control and management of the bank. The relevant question is whether the bank owns and operates the ATM and whether the FDIC insures those funds, not whether the ATM and store are FDIC insured. However, robbing a person who has just withdrawn money from a bank ATM does not constitute federal bank robbery because the alleged victim already had possession and control of the money at the time the alleged robbery took place. 12

What if I merely agree to be the getaway driver?

This is considered aiding and abetting a crime and you will be subject to the same penalties if you “knowingly receive, possess, conceal, store, barter, sell or dispose of any property, money, or any thing of value which has been taken or stolen from a bank.”13 Thus, even if you do not physically enter a bank and take anything yourself, once the principal of the crime enters your vehicle, you are in possession of stolen bank property and liable for the crime the same as if you went in the bank with a gun yourself.

Can I be convicted of federal armed bank robbery even if I used a toy gun to rob the bank?

Yes, a toy replica that simulates the appearance, but not weight, of genuine firearm is a “dangerous weapon” within meaning of federal armed bank robbery under 18 U.S.C.A. § 2113(d).14

If you or a loved one has been charged with federal bank robbery in violation of United States Code 18 USC 2113, you need to contact an experienced federal criminal defense attorney immediately. Wallin & Klarich has been successfully defending those facing federal bank robbery charges for over 40 years. We can help you, too.