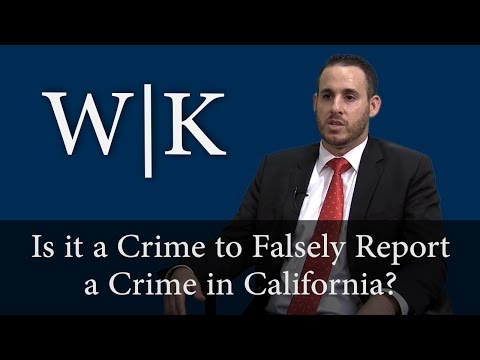 Someone cuts you off on the freeway, and you decide you’ve had enough. You call 911 and report the person as a drunk driver.

You even lie and say that he’s swerving all over the road and throwing beer cans out of his car. You follow the driver long enough to see police track him down and pull him over.

A month later, officers come to your house to question you about that call. You thought it was a harmless prank, but now you are being placed under arrest for committing the crime of filing a false police report.

In order to be convicted of falsely reporting a crime under California Penal Code Section 148.5, the prosecution must prove beyond a reasonable doubt that you:

Sentencing and Punishment for Falsely Reporting a Crime

Under PC 148.5, the crime of false report of a crime is a misdemeanor in California. If you are convicted of this crime, you face up to six months in county jail and a $1,000 base fine.

Possible Defenses to False Report of a Crime

A skilled criminal defense attorney will know the legal defenses to PC 148.5 charges. Some defenses our attorneys have used to successfully defend our clients facing these charges include:

You didn’t report a crime to a peace officer – If you didn’t personally report the crime, you can’t be convicted of falsely reporting a crime. This could be the case if you mentioned the crime to someone else who then informed a peace officer without your knowledge.

You had no idea that the report you made was false – If when you made the report you believed the report to be true, or at the very least had no reason to believe that the facts were incorrect, you should not be convicted of this crime.

It wasn’t actually a “report,” that was made, but something else – You could submit a civil complaint against officers accusing them of criminal actions, but this is not the same thing as filing a police report.

Frequently Asked Questions Regarding False Report of a Crime

What if I wasn’t entirely sure of the facts, but wasn’t really lying?

It would depend on what exactly was said, but if you made the report and you didn’t know what you were saying was false, then a skilled criminal defense attorney could argue that you shouldn’t be convicted of making a false report of a crime.

For example, you witnessed a fight occur, and upon being questioned you are asked who started the fight. If you said you thought it was Person B, but in reality it was Person A, your criminal lawyer could argue that you had no true knowledge that it was actually Person A who started the fight. In this case, you didn’t knowingly make a false report.

What if some of the report was true, but other parts were not?

It does not matter if some of the facts you reported are true and some are false. You could be convicted of falsely reporting a crime under PC 148.5 if you knowingly report any false information.

What if I didn’t go to the police to make a report, but they came to me?

Whether or not you actively went to the police to make a report or they came to you in response to someone else’s call, you could be charged with this crime. If you make any kind of report to police that you knew to be false, you could be convicted of making a false report of a crime.

If you or a loved one has been charged with false report of a crime under PC 148.5, you need to contact an experienced criminal defense attorney immediately. At Wallin & Klarich, our skilled attorneys have been successfully defending clients facing false report of a crime charges for over 40 years. We’ve helped thousands of clients in their time of legal need, and we can help you now.