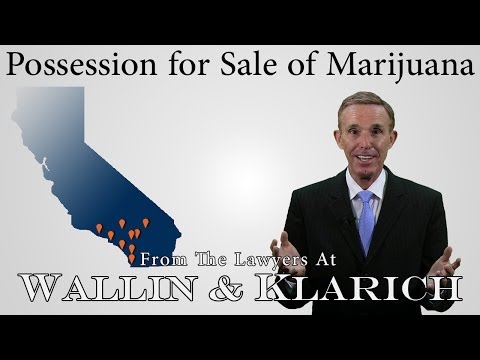 When charged with a serious crime such as possession of marijuana for sale in California, you need an experienced defense attorney that will fight for you using an effective defense strategy. There are several defenses available that could result in a dismissal or reduction of your charge. Here are some successful defenses that a Wallin & Klarich attorney can raise on your behalf:

Lack of Control or Possession

For example: You and your roommate share a one bedroom apartment together. You know that your roommate sells marijuana, but you don’t say anything because it really hasn’t affected you. One day, the police conduct a search and find a pound of marijuana hidden in your roommate’s closet. Although you and your roommate share the bedroom, you have no right to control his portion of the closet or his property contained therein. Since you did not have control or the right to control the area in which the marijuana was found, your lawyer can argue that you did not have possession for purposes of this offense.

If you assert this defense, you have the burden of proving each of these elements by a preponderance of the evidence. This means that you must prove that it is more likely than not that each of the three listed items is true.

You may have a defense to possession of marijuana for sale if you had a valid, written prescription for the substance from a physician, dentist, podiatrist, or veterinarian licensed to practice in California. It is actually the prosecution’s burden to prove beyond a reasonable doubt that you did not have a valid prescription. In California, medical marijuana is proscribed for a variety of ailments including glaucoma, movement disorders, and HIV/AIDS.

If you have a condition that is treated with medical marijuana, your attorney can argue that you had a valid prescription and therefore your possession of the substance was not illegal. However if you possess an amount of marijuana that is substantially greater than your personal medical needs, the prosecution can use this as evidence to show that you had the intent to sell.

The prosecution must prove that you knew of the nature or character of the marijuana as a controlled substance. If you had no knowledge of the presence of marijuana in your possession or you thought that it was something else entirely and not a controlled substance, you cannot be convicted under California Health and Safety Code 11359. Your attorney can argue that you lacked the requisite knowledge of the marijuana and therefore cannot be found guilty of possession for sale.

For example: Your friend gives you a large zip-lock bag full of a leafy green substance. He tells you that the substance is oregano and that you should hold onto it so he can use it to cook a delicious Italian meal at your house later that evening. As it turns out, the substance is actually marijuana. However, you have never had any experience with marijuana and don’t know how it looks or smells. Although you are now in possession of the drug, you do not have any knowledge of its character as a controlled substance and cannot be convicted of possession of marijuana for sale.

Lack of Intent to Sell

Under the Fourth Amendment to the United States Constitution, you have a constitutional right to be free from unreasonable searches and seizures. In order for the police to honor this right, they must comply with certain formalities and procedures before searching your home or vehicle. These formalities include possessing sufficient “probable cause” to conduct a search, obtaining a warrant before searching your home, and searching the vehicle only for evidence of the crime for which you were arrested. If the police illegally obtained evidence by failing to follow any one of these constitutional guarantees, your defense attorney can ask the judge to have that evidence excluded and the chances of winning your case will increase significantly.

If you are looking for a California possession of marijuana for sale defense lawyer to represent you, Wallin & Klarich can help.

With over 40 years of experience and offices in Orange County, Los Angeles, San Diego, Riverside, San Bernardino, Ventura, West Covina and Victorville, our highly skilled and professional defense attorneys will conduct a thorough investigation of the facts and passionately argue that your case should be dismissed.