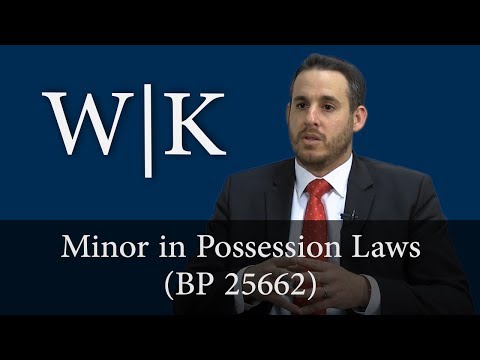 Under California Business and Professions Code (BP) 25662, it is a misdemeanor for any person under the age of 21 to have any alcoholic beverage in his or her possession on any street, highway, or in any place open to the public.1 Often referred to as “minor in possession” law or “underage drinking” law, BP 25662 applies to not only minors, but also to persons over the age of 18 who are still under the age of 21.

Prosecution for Minor in Possession of Alcohol

To secure a conviction for violations of BP 25662, the prosecutor must prove the following:
<

While the elements of this crime are rather clear; it is important to fully understand the terms specified under this law.

Possession of alcohol by a person under the age of 21 is legal under certain circumstances. BP 25662 states that it is lawful to possess the beverage if the minor is following reasonable instructions from an adult. Specifically, the law notes that it is legal if the person is following “the instructions of his or her parent, legal guardian, responsible adult relative, or adult designee relating to disposition of the alcoholic beverage.” This can be either in delivering the beverage (such as carrying it from the car parked on the street to the house), or throwing it in the trashcan that is set out on the curb. It also includes handling the beverage as part of the defendant’s occupation, such as serving alcohol as a waiter or waitress.

Possession does not simply mean that the defendant had the drink in his or her hand. It can also be applied “constructively,” which means that the defendant had or shared control with another over the beverage. For example, if you went to the beach, and were drinking from a beer bottle that you then put down on a towel nearby, you are still considered to be in possession of the bottle.

Public Place or Place Open to the Public

Punishment for minor in possession upon a first conviction results in a $250 fine and 24 to 32 hours of community service.

In addition to these penalties for underage drinking, your driving privilege will be affected. Under California Vehicle Code §13202.5, any person who is convicted of possession of alcohol while under the age of 21 will have their driver’s license immediately suspended for one year, and if you have not yet obtained your license, the court will notify the DMV to delay your license for one year after you pass your driving test.3

In order to convict you of underage drinking, the prosecution must prove that you were not following the orders of a parent or legal guardian to deliver or dispose of the beverage and that you were acting upon your own recognizance.4

There are other defenses to a charge of violating BP 25662. Some defenses include:

There is also a defense involving self-reporting of alcoholic consumption.  California Business and Professions Code 25667 gives immunity from criminal prosecution for possession of an alcoholic beverage to any person under the age of 21 years who meets the following conditions:

Yes. BP 25662 does not require that a person has consumed any alcoholic beverage. It simply requires that a person under the age of 21 be in control of the drink in any manner.

It depends on the circumstances. If the party is in either a public place, or a place that has been made open to the public, and you were handling alcohol (such as bartending for your friends), you could be arrested if the police caught you.

In addition to fines and community service, a minor in possession charge can result in a one year suspension of your driver’s license. In these types of cases, the court will often accept a guilty plea and issue a fine but will not tell you that your license will be suspended. If you or a loved one are under the age of 21 and were arrested for possessing alcohol, speak to an experienced criminal defense attorney at Wallin & Klarich today.

Our attorneys at Wallin & Klarich have over 40 years of experience defending those charged with minor in possession in California. With offices in Los Angeles, Sherman Oaks, Torrance, Tustin, San Diego, Riverside, San Bernardino, Ventura, West Covina and Victorville, we can help you get the best possible results in your case no matter where you work or live.

1. Cal. Bus & Prof. Code §25662: “(a) Any person under the age of 21 years who has any alcoholic beverage in his or her possession on any street or highway or in any public place or in any place open to the public is guilty of a misdemeanor. This section does not apply to possession by a person under the age of 21 years making a delivery of an alcoholic beverage in pursuance of the order of his or her parent, responsible adult relative, or any other adult designated by the parent or legal guardian, or in pursuance of his or her employment. That person shall have a complete defense if he or she was following, in a timely manner, the reasonable instructions of his or her parent, legal guardian, responsible adult relative, or adult designee relating to disposition of the alcoholic beverage.”↩

“(…) (d) This section applies to violations involving controlled substances or alcohol contained in the following provisions: