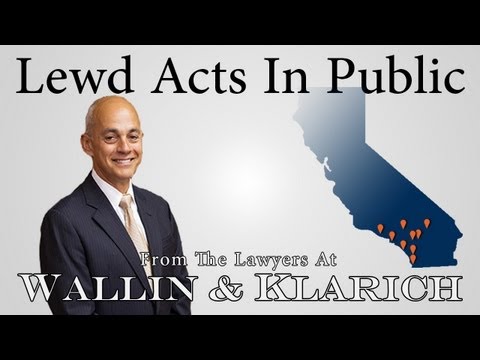 Lewd Conduct in Public PC 647(a) Prosecution in California

If you’re charged with soliciting or engaging in lewd or dissolute conduct in a public place in California, it is imperative that you are informed of what consequences you may face. At Wallin & Klarich, our attorneys want to explain to you what the prosecution needs to prove in order to convict you of this crime.

1. You willfully engaged in the touching of your own or another person’s genitals, buttocks, or female breast;

3. At the time you engaged in the conduct, you were in a public place or a place open to the public or to public view;

4. At the time you engaged in the conduct, someone else who might have been offended was present; AND

5. You knew or reasonably should have known that another person who might have been offended by your conduct was present.

What is a Willful Act?

A willful act is defined as a purpose or willingness to commit the act.  It does not require any intent to violate law, to injure another, or to acquire any advantage.

Sexual arousal or gratification of yourself or another, or to offend another

Another way the prosecution can find you guilty is if they prove that you committed your conduct with the intent to sexually arouse or gratify yourself or another. In other words, there was no other purpose for your act other than sexual gratification. Simply put, the sole purpose of touching your genitals or the genitals of the other was purely sexual in nature; thus, sexual gratification can be established based on the areas touched.

However, you can also be found guilty by annoying or offending another person.  For example, rubbing or touching another person’s genital areas without permission or consent will constitute being highly offensive.

What constitutes a public place?

In order to be found guilty of this crime, the conduct or touching must have been done in a public place. Areas deemed to be public places include, parks, public bathrooms, open sidewalk, and movie theaters.

In order to be convicted of soliciting or engaging in dissolute or lewd conduct in a public place there must have been a third party present that could have viewed the touching or conduct. Not only must another person be present, but the Defendant must have reasonably known the conduct would have been offensive to the third party.  Therefore, it is not merely enough to have a third party present and witness the conduct.