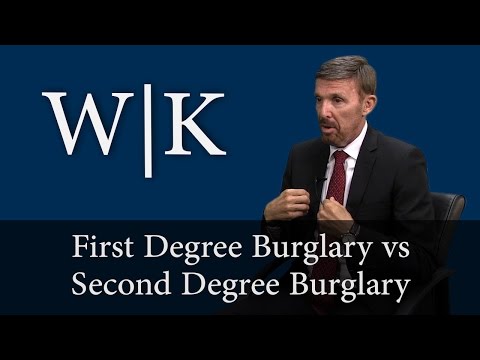 What is the Difference Between 1st and 2nd Degree Burglary in Los Angeles?

California Penal Code 459 defines burglary as breaking and entering a structure with the intent to steal or commit a felony. A structure could include a residence, a business, a cargo container, or even a tent or a storage unit.

First degree burglary is considered a strike under California Penal Code Section 1192.5, and carries a much harsher sentence than second degree burglary.

If you have a prior strike, your sentence will be doubled and you must serve at least 80 percent of the double time. If this is your third strike, you could be sentenced to prison for 25 years to life.

Second degree burglary is a wobbler, which means that prosecutors can charge you with a felony or a misdemeanor. How you are charged depends on various factors.

Some factors which can influence whether you’re charged with a felony or a misdemeanor are:

Another factor that affects the outcome of your case is whether you have a competent and dedicated attorney with experience defending clients facing burglary charges. Burglary is a serious crime, and the consequences of a burglary conviction can affect you for the rest of your life.

In order to convict you of burglary, the prosecutor must prove that you intended to commit a crime when you entered the structure. This is true regardless if you are facing first or second degree burglary charges.

There are numerous defenses to burglary. Some of these are:

If you or a loved is facing burglary charges, you need to contact an experienced criminal defense attorney who can help you understand the charges against you. The attorneys at Wallin & Klarich have been successfully defending our clients charged with burglary and other serious crimes for over 40 years. Our criminal defense attorneys have the knowledge and experience to provide you with the best legal defense.

We have offices in Orange County, Riverside, San Bernardino, Victorville, West Covina, Torrance, Los Angeles and San Diego, our skilled burglary attorneys can help you no matter where you work or live.