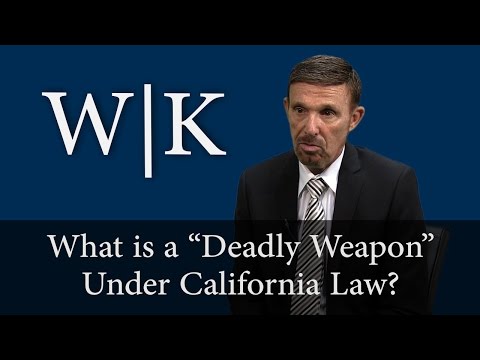 Prosecution of Assault with a Deadly Weapon In order to be convicted of assault with a deadly weapon in violation of California Penal Code Section 245, the prosecution must show that you:

It is not required that you actually injured the other person, or that you intended to injure that person, or that you even touched them.1 So if you use a deadly weapon in order to frighten or intimidate someone, then you could still be convicted of this crime.

Objects Considered to Be Deadly

A loaded firearm is not covered under this law because there is a separate assault with a firearm charge that has even stricter penalties.2 So what is covered?

Under the law, almost anything can be considered a deadly weapon as long as it has the potential to be deadly. The law defines a deadly weapon as “any object, instrument, or weapon that is inherently deadly or one that is used in such a way that it is capable of causing and likely to cause death or great bodily injury.”3

Some examples of potentially deadly weapons:

Punishment for Assault with a Deadly Weapon

Assault with a deadly weapon is a wobbler in California, meaning that you could be charged with a misdemeanor or a felony depending on the facts of your case. How you are charged will also depend on:

If you or a loved one has been charged with assault with a deadly weapon in California, you need to contact an experienced criminal defense attorney immediately. At Wallin & Klarich, our skilled attorneys have been successfully defending clients facing assault charges for over 40 years. We will meet with you to review the facts of your case, and plan a defense strategy that will help you get the best outcome possible.

With offices in Los Angeles, Sherman Oaks, Torrance, Orange County, San Diego, Riverside, San Bernardino, Ventura, West Covina and Victorville, there is an experienced Wallin & Klarich criminal defense attorney available to help you no matter where you work or live.