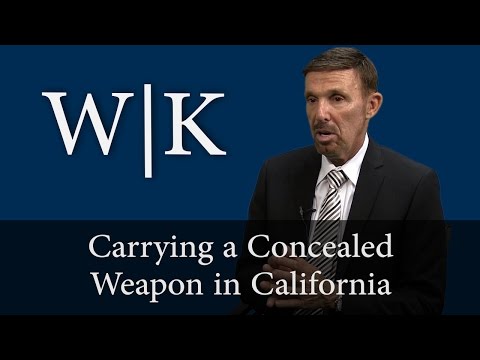 Under California Penal Code 25850(a), it is a crime for you to carry a loaded firearm on your person or in a vehicle in any public place or on a public street.

A public place, for purposes of PC 25850, is anywhere that is readily accessible to the public. This includes parks, sidewalks, public streets, or any area in which it is unlawful to possess a loaded firearm.

In addition to PC 25850(a), there are several of other crimes the prosecution may charge you with, depending on the facts of your case. These include:

In order to be convicted of this crime under California Penal Code 25850(a), the prosecution must prove that:

A firearm is broadly defined under PC 25850. Anything that can be used as a weapon capable of discharging a projectile through a barrel by combustion is a firearm under this law.

The law provides for certain exemptions to PC 25850. Thus, you cannot be convicted of unlawfully carrying a loaded firearm in public if you are a:

Generally, carrying a loaded firearm in a public place is a misdemeanor in California. However, depending on certain factors, you can also be charged with a felony. If convicted of a misdemeanor PC 25850 violation, you face up to 364 days in county jail, a $1,000 fine, or both.

If you are convicted of a felony, you face a sentence of 16 months, two or three years in state prison. Under PC 25850, you can be charged with a felony if:

There are several defenses that a skilled criminal defense attorney can raise on your behalf. Some of these defenses might include:

At Wallin & Klarich, we commonly receive questions from clients who are accused of possessing a firearm in public. Some of these include:

Most BB guns are powered by CO2 and are not fired by combustion. Therefore, BB guns are not considered firearms for purposes of PC 25850.

It does not matter whether the firearm is in working order so long as it is capable of firing and was designed for that purpose.

3. What if I did not know the gun was loaded?

You need to have knowledge that the gun is loaded in order to be convicted of PC 25850(a). If the prosecution cannot prove that you knew it was loaded, then you should not be convicted.

Have You Been Arrested for Carrying a Loaded Firearm? Call the Skilled Criminal Defense Attorneys at Wallin & Klarich

If you or a loved one has been charged with carrying a loaded firearm in a public place in California, you need to contact an experienced Wallin & Klarich criminal defense attorney immediately.

At Wallin & Klarich, our skilled attorneys have been successfully defending clients facing gun charges for over 40 years. We will meet with you to review the facts of your case, and plan a defense strategy that will help you get the best outcome possible in your case.