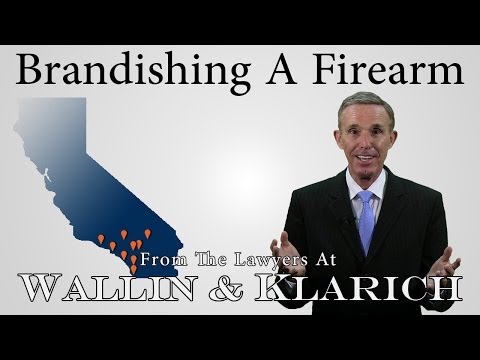 What Must Be Proven | Misdemeanor Brandishing a Weapon

A deadly weapon under the law can be any object or weapon that is inherently deadly. It is also one that can be used to cause death or great bodily injury. Therefore, in determining if an item is a “deadly weapon” the prosecutor will look at the facts and circumstances of the incident.

Brandishing a Weapon Penalties and Sentencing | What You’re Facing

Depending upon the facts of the case and which subsection of the penal code you violated, you could be jail time or hefty fines.

Brandishing a firearm on the grounds of a day-care center while it is open for use, can be a “wobbler” charge under PC 417(b) and can be charged as either a felony or misdemeanor:

Brandishing a Firearm at a Police Officer | PC 417(c)

Possible Defenses to a Brandishing a Weapon Charge in California

There are a number of valid defenses to brandishing a weapon charge. If you’re charged with this crime. Your best move is to hire an aggressive group of criminal defense attorneys that have handled hundreds of brandishing cases over the last four decades and understand what it takes to get a favorable outcome. Here are some defenses that we have successfully used in the representation of our clients who were facing brandishing weapon charges:

One of the best and most often used defenses to a charge under PC 417 is self-defense. If a person was acting in justifiable self-defense or the defense of another person, he or she is considered innocent under the law.  A person lawfully acts in self-defense when he or she:

No Deadly Weapon or Firearm

PC 417 only applies if a defendant was armed with a deadly weapon or a firearm. Therefore, if the weapon under question can be proven to not have been a deadly weapon or firearm that would be one reason a criminal charge for this crime would be likely dismissed.

Not only do we have 40+ years of experience defending brandishing a weapon charges, but we also bring a 24/7 communication policy to the table. Our objective is to ensure that you are aware of every aspect of your case at all times. We want our clients to be active participants in their own defense and to never have to wonder what is happening in their case.

Our reputation as a successful and aggressive criminal defense firm is well known in Orange County and throughout Southern California. Many of the judges and prosecutors know in the courts where we appear that we are strong advocates for our clients. Our sole focus is to fight for the rights of our clients and present the best defenses that the facts and law allow. For 40+ years we have developed this reputation by taking on and winning tough cases. Click below to hear from some of our previous clients whose livelyhoods we’ve helped protect:

Last year on Mother’s day I was arrested and subsequently charged with a violation of Penal Code 12020(a), possession of a weapon which was a collapsible baton. I turned to the Law Offices of Wallin & Klarich. I met with the attorney, and hired Wallin & Klarich because they appeared to ...

“I am very pleased that I hired Wallin & Klarich to represent me and help me dismiss the charges I was facing for possession of a concealed weapon. My attorney filed a motion to get the case dismissed and the Judge at the Airport Court granted the motion. I am relieved that the case has been d...

“I sold some furniture, to friend at the time, who later refused to pay the balance owing. I later approached him to discuss the money owed and he started a big fight. I then defended myself. I was arrested for felony assault with a deadly weapon because I won the fight he started when I returned ...

Being arrested and charged with brandishing a weapon can be very frustrating because you probably thought you were doing the right thing. We can develop a defense strategy plan that will use our knowledge, skills, and resources to give you the best defense possible. Our help and guidance are only a quick phone call away.

Contact us online or call us today at (877) 4-NO-JAIL for a free phone consultation. With offices in Orange County, Riverside, San Bernardino, West Covina, Torrance, San Diego, Los Angeles, San Diego, and throughout Southern California, we have an office near where you live or work. Many of our initial consultations are done virtually. During your initial consultation, we will ask about the facts of your case. We will discuss every aspect of your case and go over the potential defenses that may be available for you. When it matters most, you can rely on Wallin & Klarich to defend your rights.

You will be given a certain amount of leeway if you can establish that you were not the initial aggressor, meaning you did not start the fight or were the first to draw a weapon. However, you can still face criminal charges if you continued to exhibit aggression or use force after the threat is over or neutralized. This ironically turns you into the initial aggressor. This could be true even if you acted to protect yourself or others.

One necessary condition for brandishing a weapon is that you must have been acting in a threatening, angry, or aggressive manner. If you were just showing someone your gun, then you may have a valid defense. This, however, requires a skilled attorney and time to prepare. Call us ASAP and let's see if we can help you: (877)4-NO-JAIL

A "deadly weapon", under California law, is any weapon that is inherently deadly or has the capability of causing or is likely to cause serious bodily injury or death. Although this is slightly vague, it helps to know that this definition has historically been stretched to include baseball bats, broken beer bottles, and items of that nature as well as the typical gun or brass knuckles.