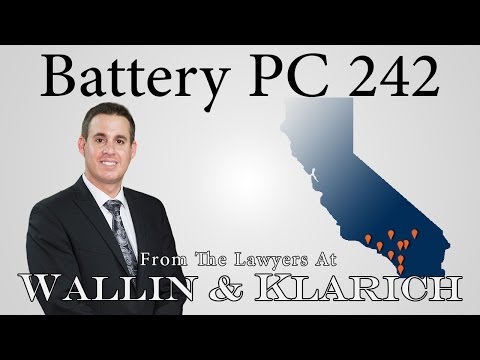 What are the Elements of Battery that the Prosecution Has to Prove?

Under California Penal Code 242, battery “is any willful and unlawful use of force or violence upon the person of another.” Simply stated, a battery is a willful and unlawful touch that is harmful or offensive to another. In order for you to be convicted under PC 242, the prosecutor must prove the following elements of battery:

The prosecution can satisfy the last elements of battery charges if you in fact touched another person, but also if you touched something closely attached to that person, for example his or her clothing. Even the slightest acts can be considered harmful or offensive and bring about battery charges. For this reason it is important that you contact an experienced criminal defense attorney to ensure that you present a proper defense against the allegations.

In addition, you may also be charged with sexual battery under PC 243.4 if you harmfully or offensively touch the intimate part of another. For more information on sexual battery visit our sexual battery/assault content page.

Under California Penal Code 240 an assault is defined as “an unlawful attempt, coupled with a present ability, to commit a violent injury on the person of another.” An assault can simply be described as an attempt to commit a battery. Therefore, if you attempted to commit a battery, but did not end up causing any harm or injury, you can still be charged with assault.

For more information about assault and the sentencing and punishment associated with assault charges visit our assault content page.

Even minor acts can be charged as a battery and carry severe consequences. If you have been charged with a battery it is important that you contact an experienced battery defense attorney to assist you.

With over 40 years of experience and offices in Orange County, Los Angeles, San Diego, Riverside, San Bernardino, Ventura, Victorville, and West Covina, the attorneys at Wallin & Klarich are available to help you through the legal process.

For questions relating to the prosecutorial burden under 242 PC, or any questions about the elements of battery, please contact Wallin & Klarich at (877) 466-5245 or submit the form at the top of this page. We will be there when you call.