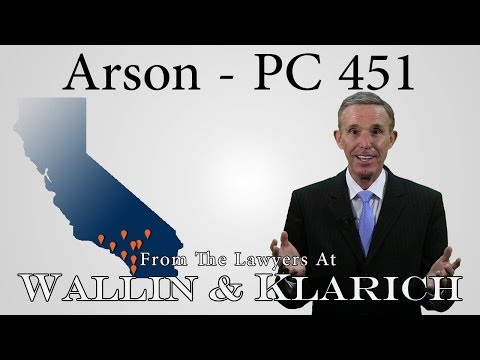 There are different types of arson crimes all charged under California penal code section 451. The punishments for arson in California vary tremendously depending on what exactly you are charged with.

However, if you are charged and convicted of arson that causes great bodily injury under California Penal Code Section 451(a), that is a felony punishable by imprisonment in state prison for five, seven, or nine years. An arson that causes an inhabited structure or inhabited property to burn under California Penal Code Section 451(b) is punishable by imprisonment in the state prison for three, five, or eight years.

Aggravated arson, charged under California Penal Code Section 451.5 shall be punished by imprisonment in the state prison by 10 years to life.

To fully understand the differences between each arson charge, it is important to call a Southern California arson attorney at Wallin and Klarich today.

Arson charges, no matter the surrounding circumstances, are very serious criminal allegations. This charge is almost always filed as a felony charge. If you are found guilty of arson, you can be sent to prison and this can act as a “strike” or serious felony. That is why it is crucial to contact one of the California arson defense attorneys at Wallin and Klarich as soon as you think you could be potentially charged with arson.

In addition to prison time, a strike conviction has a tremendous and potentially devastating effect because any future conduct will be punished more severely. If you have a prior strike, be aware that if at any time in your life you are convicted of a new felony your potential sentence may be doubled by the court. It is important to consult with Wallin and Klarich, an experienced arson defense law firm, to determine the consequences of a strike conviction.

There are several factors involved in a potential arson charge that can lead to sentencing enhancement that will greatly increase a defendant’s prison sentence. Some examples may include if you have previously been convicted of any felony or misdemeanor arson. In those instances an individual can had an additional 3,4 or 5 years in prison added to their sentence pursuant to California Penal Code Section 451.1(a)(1).

Call Wallin and Klarich today at (877) 466-5245. We will be there when you call.
SCHEDULE YOUR free consultation