Forgery Laws – What Are the Elements of Forgery in California? 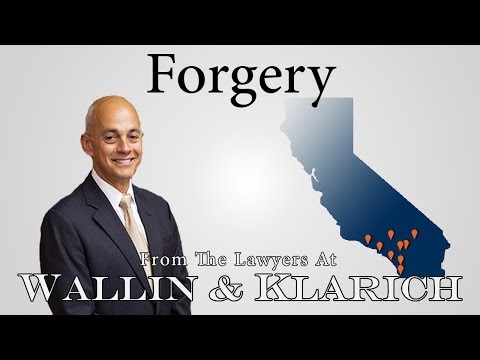 If you’ve been charged with violating forgery laws, you could be facing some serious time. It is essential to your well-being that you understand the severity of such charges and that you should not hesitate to contact an experienced attorney immediately. At Wallin and Klarich in California, our attorneys have handled forgery cases successfully for over 40 years. Give us a call today so we can help you get the proper court representation and receive the best outcome possible. Your future depends on it.

If you are charged with violating forgery laws, you need to understand the crime itself. Below, the attorneys at Wallin & Klarich explain what the prosecution needs to prove in order to convict you of this offense. You can also read our defenses page to learn more about what strategies can be used to defend your case.

Under California Penal Code sections 470 through 472[i], you can be found guilty of violating forgery laws in California if you create or change certain documents with the intent to commit fraud while knowing that you had no authority to do so.

In order to convict you of violating forgery laws, the prosecution must prove two elements:

Element One: What writings are covered by the forgery statute?

Penal Code sections 470 through 472 cover a long list of documents that are subject to forgery, but they fall into three major categories: faking seals and handwriting, faking signatures, and faking or altering specific documents. Penalties for forgery under these categories can be found on our punishment and sentencing page.

Forgery by faking a seal or handwriting

Under Penal Code section 470(b), you can be convicted of violating forgery laws in California where you fake someone else’s seal or handwriting. In most cases, the prosecution is alleging that through faking their handwriting or seal, you altered or created a document that allowed you to defraud someone of money or property.

Forgery by signing someone else’s name to documents

While faking someone else’s signature is also faking someone’s handwriting, forging signatures has its own code section. Penal Code 470(a) makes it illegal to sign specific documents with someone else’s name without their permission. In order to prove you guilty in California, the prosecution has to show that,

The documents covered are listed under Penal Code section 470(d), and they include:

Just as signing the above documents is forgery, if you fake or alter the documents from section 470(d), you can also be found guilty of violating forgery laws.

Element two: What is the intent to commit fraud?

Along with proving that you committed one of the activities described above, the California prosecutor must also prove that you intended to commit fraud. This means that because of your actions, you intended for someone to not have or get something that should belong to them—be it money or property. For forgery, you do not have to even receive the money or property involved; merely doing the act with the intent to commit fraud is enough.

Intent can be hard to prove and the prosecution will often rely on “circumstantial evidence” to show your intent. They will point to your statements, actions, and relationships relating to their allegation. At trial, they will ask a jury to infer your intent.

The prosecution has to prove both of the elements beyond reasonable doubt. Meaning, the California jury must have no reasonable doubt in their mind that you falsely created the writing and intended to commit fraud. To meet their burden, the prosecution can rely on circumstantial and direct evidence.

Because the prosecution does not have the actual check, they do not have “direct” evidence. However, they do have “circumstantial” evidence. If the prosecution wants to prove James forged a $500 check, they might argue a number of circumstantial facts. They will show he was desperate for money. Then, that he obtained his ex-girlfriend’s checkbook; that he went to the bank; and when he was arrested he had $500 on him.

If you face prosecution for allegedly violating forgery laws, you need to contact an experienced forgery defense attorney.

For questions or concerns, visit our FAQs page or call Wallin & Klarich today at 877-4-NO-JAIL for questions more specific to your case. We will get through this together.