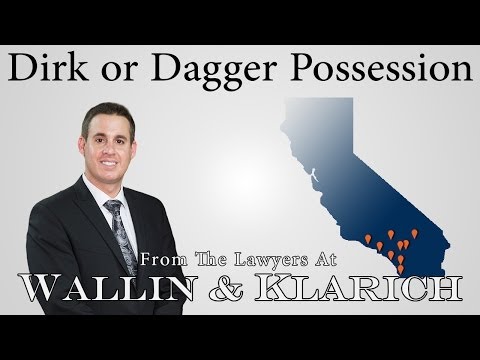 California law prohibits the unlawful possession of a dangerous stabbing weapon known as a “dirk” or “dagger” pursuant to Penal Code Section 21310. In addition to being a criminal offense, carrying a dirk or dagger in violation of the law is considered a nuisance – which means, the weapon is subject to forfeiture and destruction.

In this section, our attorneys at Wallin & Klarich want to share with you how California law defines a dirk or dagger and the elements of prosecution for carrying such a weapon. We will also discuss possible defenses to a dirk or dagger possession charge as well as the sentencing and punishment you may face if you are convicted of this offense.

Let’s begin by defining what a dirk or dagger is…

Definition of a Dirk or Dagger

A “dirk” or “dagger” is defined under Penal Code Section 16470 as the following:

A folding knife (such as a pocket knife) is considered a stabbing weapon capable of inflicting great bodily injury or death only if:

While certain stabbing weapons are legal to possess, such as a folding pocket knife or utility knife, a switchblade (with a blade length of two or more inches) is illegal to possess in public (Penal Code Section 21510).

You may carry a folding pocket knife or utility knife concealed upon your person if it is closed or if the blade can’t be locked. Also, Penal Code Section 20200 permits you to openly carry straight knives and folding knives that are opened and locked provided that they are:

Prosecution for Possession of a Dirk or Dagger

In order to find you guilty of possession of a dirk or dagger, a prosecutor bears the burden of proving all of the following elements beyond a reasonable doubt:

Defenses to Possession of a Dirk or Dagger

Your California criminal defense attorney may be able to raise several defenses to possession of a dirk or dagger on your behalf, including:

Unlawful possession of a dirk or dagger is a “wobbler” offense, which means the prosecution has the option of charging you with either a misdemeanor or a felony.

If you or someone you care about has been charged with unlawful possession of a dirk or dagger in violation of PC 21310, you should contact one of our experienced criminal defense attorneys at Wallin & Klarich as soon as possible. You could be prosecuted for a misdemeanor or a felony, depending on the circumstances of your offense.

Our attorneys at Wallin & Klarich have over 40 years of experience defending clients facing weapons-related charges. Hiring an attorney from Wallin & Klarich is your best chance to avoid the serious consequences of violating California weapons laws such as jail time, heavy fines and potential loss of your right to carry a firearm.

With offices in Los Angeles, Sherman Oaks, Torrance, Tustin, San Diego, Riverside, San Bernardino, Ventura, West Covina and Victorville, our criminal defense attorneys at Wallin & Klarich are available 24 hours a day, 7 days a week to answer all of your questions and provide you with the very best legal representation. We will help you get the best result possible in your case.
Call us today at (877) 4-NO-JAIL or (877) 466-5245 for a free telephone consultation. We will get through this together.