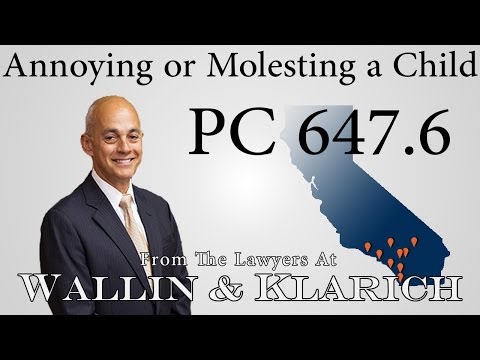 If you have been charged with child annoyance or molesting of a child in California, it is important to understand what this crime entails. Our attorneys at Wallin & Klarich want to share with you what the prosecution needs to prove in order to convict you of this offense.

Under California Penal Code section 647.6 it is illegal to annoy or molest any minor under the age of 18 while motivated by an unnatural or abnormal sexual interest in the minor. In order to convict you of this offense, the prosecution must prove the following:

1. You engaged in conduct directed at a minor AND

2. A normal person, without hesitation, would have been disturbed, irritated, offended, or injured by your conduct AND

3. Your conduct was motivated by an unnatural or abnormal sexual interest in the minor AND

4. The minor was under the age of 18 years at the time of the conduct

If it is alleged that you committed the offense by entering an inhabited area without consent, the prosecution must also prove:

Conduct directed at a minor

The prosecution must prove that you engaged in some sort of conduct directed at minor (child under 18 years of age). The conduct itself does not actually have to be sexual in nature, meaning that you don’t need to touch the minor or expose yourself in order to satisfy this element. Rather, any conduct will suffice so long as it is directed at a minor. However, a recent decision handed down by the California Court of Appeals held that this conduct does not need to be directed at any one child in particular. It is enough that your conduct be directed at a group of children without singling out one specific minor.

“Annoy” and “molest” are synonymous and generally refer to conduct designed to disturb, irritate, offend, injure or tend to injure another person. Annoy means to disturb or irritate, especially by continued or repeated acts. Molest means to interfere with or meddle with so as to injure or disturb another.

In order to be convicted of this offense your conduct must have disturbed, irritated, offended, or injured a “normal person.” This is an objective standard, meaning that your conduct does not actually have to offend or irritate the victim so long as a reasonable person in his or her position would have been offended or irritated by your actions. You also do not need to touch the victim in order to face criminal liability for this offense. For example: You can “annoy” a minor by taking his or her picture in a public place in an offensive or irritating manner.

You conduct must have been motivated by an unnatural or abnormal sexual interest in the minor victim. This is a difficult element to prove because absent a confession, the prosecution will have to rely on circumstantial evidence in order to reveal the motive behind your actions. Evidence showing that you were sexually aroused or gratified by your conduct directed at the minor will likely satisfy this requirement.

Victim was under 18 years of age

The prosecution must also prove that the victim was a minor (under the age of 18) at the time you committed the offense. Under the law, a person becomes one year older as soon as the first minute of his or her birthday has begun.

If it is alleged that you entered a structure without consent during the commission of the crime, the prosecution must also prove that your conduct occurred after you entered an inhabited dwelling, building or trailer coach without consent. A dwelling, building, or trailer coach is inhabited if someone lives there and is either present or has left with the intent to return. This also includes any structure that is attached and functionally connected to building, such as an office or garage. Consent to enter the structure is only valid if it is given freely and voluntarily.

If you or someone you know has been charged with annoying or molesting a child in California, you need to contact an experienced criminal defense attorney who is dedicated to giving you the best representation possible. With offices in Orange County, Los Angeles, San Diego, San Bernardino, Riverside, Ventura, Victorville and West Covina, Wallin & Klarich has successfully represented clients facing annoying or molesting a child charges for over 40 years. Drawing from our extensive experience, our talented defense lawyers will thoroughly review your case and develop an effective defense strategy to help win your case.